Featuring Melissa George (30 Days of Night – a pretty good vampire movie for those who haven’t seen it) and directed by Christopher Smith who did Creep and Severance.

Although this movie is set on a boat where weird things happen, it is not actually about the Bermuda Triangle, despite the name.

The main character, Jess, has an autistic son, Tommy.  She is invited to go out sailing with a group of friends and straight away Jess is acting strange, though you don’t actually know why.  The group go out on the yacht where Jess falls asleep and starts to have strange dreams.  When she wakes up a terrible storm hits and the yacht is overturned, killing one of the group.  The others survive hanging onto the bottom of the boat.  They have been there a while when a huge ship approaches them. They manage to wave it down, but when they board the ship appears deserted.  Jess starts to experience déjà-vu and is convinced she has been there before. The ship is called The Aeolus who is ‘a God who made a promise to death that he did not keep.’

Then the killing starts and Jess is confronted by the worst déjà-vu anyone will ever experience – Groundhog day eat your heart out!  Where Jess starts out as a likable, but fragile character, she quickly proves herself to be a fighter, and then goes on to be someone else entirely.  It is a truly mind-bending plot and if you try to think about it too much I honestly believe your brain will probably start to melt.  There are plenty of shocking moments will keep you gripped. Although the film does contain plot holes of a paradoxical nature, especially at the end,  it is still a horror that gets you thinking.  I would highly recommend it for a night in.

Something Wicked rating of 8/10.

And as someone who doesn’t like boats it is another great reason not to go sailing! 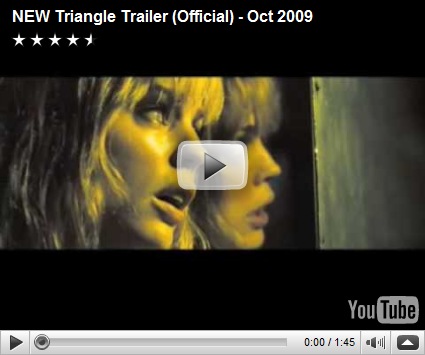 Also, Nicole has a short story published at http://www.smashwords.com/books/view/11115.  It features the vampire from her novel Release and is set in New Orleans, classic vampire territory.  It is available for download for FREE!!! So don’t miss out.

Posted by Marissafarrar at 17:25