Sneak Peek of 'Endless' Book Five in the Serenity Series!

The big day is almost here! although the official release date is the 2nd of May, I'm expecting 'Endless' to go live any day now. Exciting!

To keep you all geared up for the new book, here is the first chapter. Enjoy!

I don't do a huge number of guest posts, the main reason being that I'm normally so swamped in writing that I simply don't have time. However, every so often someone special approaches me and I can't possibly bring myself to say no, even though I'm just as busy as usual!

Being the mother of two, and soon to be three, children are always close to my heart, so when Tania approached me via facebook to ask if I would feature the children's charity she is supporting, of course I said a big fat yes!

Tania is trying to raise awareness (and of course money!) for the Starlight Foundation.

The Starlight Children’s Foundation transforms the experience of hospitalisation and treatment for seriously ill children and their families- Starlight is the only children’s charity with a permanent , physical presence in very major paediatric hospital in the country.

Every minute of every day a child is admitted to hospital in Australia. For thousands of these children what happens next is the diagnosis of a serious or chronic illness that changes their life, and the lives of their families, forever.

This is where Starlight steps in - delivering a range of innovative programs, built on the World Health Organisation’s social model of health, to support the well-being and resilience of these seriously ill children and their families.

Starlight programs are integral to the total care of seriously ill children - while the health professionals focus on treating the illness, Starlight is there to lift the spirits of the child - giving them the opportunity to laugh and play and be a child again

YOU CAN HELP TOO!

A message from Tania

I am asking for all’s assistance.
To give to others is to give to oneself, and  I NEED YOUR HELP!!!
Help us to raise funds for the Starlight Children's Foundation, which supports terminally ill children and their families.
There are two ways in which people can help. It is very simple.
By simply hosting, reviewing or interviewing myself/my book via a blog post, amazon, newspaper, radio, TV within a 21day window frame, between the dates of Friday 12th of April and Friday the 3rd of May. For every appearance, I will be donating $1 to the Starlight Children’s Foundation.
If any of you could help, I would be so grateful. If you could connect me with anyone else who would be happy to interview, do a short post or review on myself/my book, I would be ever so grateful more.

I am also asking for donations, even $1, which you may do direct via this link.  http://starlightday2013bb.gofundraise.com.au/page/ElizabethT
You may also follow our progress on the Starlight Author's Aid Facebook Page. http://www.facebook.com/StarlightAuthorsAid

We are looking at making this an annual event. This year it is based upon myself, though every year after, we will base it upon another upcoming author. So please share and pass this along to all. Let's make this a huge affair and raise much needed funds for a very worthy cause.

My heartfelt thanks to all.
Love, Blessings and Faerie Kisses always xo

Tania Elizabeth is a mother first and foremost and the author of The Tier of Eternal Grace. Book One The Moon Clearing was released earlier this year. Book Two The Mirrors Shadow will be released about September. Book Three will then follow in the early part of 2014.
The Tier of Eternal Grace is a captivating fantasy of magic and passion, wound into the truths of reality that will enchant readers with its depiction of the faerie realm, and the exploits of the faeries themselves. Book One of the series The Moon Clearing is an immersive tale of mysticism and adventure, of spiritual and sensual intent that shall enrapture your every sense. 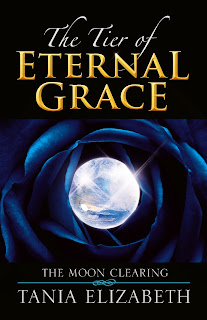 SUMMARY
Beyond the boundary that separates the mundane and earthly planes from the divine lies Eterna Fadas, a place ruled by extraordinary beings, lithe and human-like in appearance, yet ethereal in their grace and beauty, and sensuous in nature.
"I have existed always! Where I began I do not know, for all I know is just as I am today!"
As Queen, Tatiana was thought to have lived a life of opulence, her faith and beliefs her endearing essence. Why then was it so, that beneath the picture of perfection laid torments and terrors even she dare not explain. Being She came with its prices paid. Being She came with a deal; a contract in which she was to relinquish herself to a rogue of unmerciful fury. Would this be the end of all she know? Would this be the end of her existence?

Posted by Marissafarrar at 15:44 2 comments:

This morning I was thrilled to sit down and open my email box, just as I do every morning, to discover an email from Amazon letting me know that they have finally received and are accepting my W-8BEN form! Those of you who are also authors living outside of the United States will probably know what this is. For those who don't, this form means that Amazon will no longer be taking the 30% of my royalties that they have been taking to pass onto the IRS for as long as I've been earning my income from them!

I started this process in January 2012, when I requested a headed letter from Smashwords in order to get another form sent to the IRS in order to gain my ITIN. Just this part of the process alone took ten months. Yes, TEN months. It wasn't until I was deeply into trying to get my ITIN that I discovered it probably would have been easier to simply phone up and get an EIN instead, but as by this point the IRS had my actual passport, I figured I just needed to see it through.

Forward on several months... As soon as I received my ITIN, I filled in my W-8BEN and sent copies to both Amazon and Smashwords. Neither letter reached its destination. In the new year I tried again, and sent letters to both companies, this time using the most expensive tracking money could buy. This time, both forms reached their destinations, and while Smashwords happily accepted the form and sent me an email to say that it had all been processed, I had to chase Amazon. After a few days I received an email to say that my form had been rejected due to my inserted an 'invalid country'. It seemed I had written 'Great Britain' in the address instead of United Kingdom. Very annoying. So, third time lucky, I wrote out a new form and sent it off, and ta-da, the form has been accepted! Thank goodness! This means my little family will now be up several hundred pounds each month, and while I still have to pay tax in my own country (of course), it will be a lot less than I've been paying the IRS.

In other news, yesterday I went for my 20 week scan! Yes, we did find out what sex the baby is, and no, I'm not telling. *grins* Needless to say, the baby is healthy and kicking away, so all is good. Now I'm over the hump and the time I have left to go is less than the time I have left. I'm much better at taking care of a baby than I am at growing one. So now it all feels a little more real and we're really excited to be welcoming in a new little member of our family, and I'm working my backside off in order to get all the books finished before the baby is born and I take some well deserved maternity leave.
Posted by Marissafarrar at 12:26 No comments: