Huge apologies for the lack of blogging/emails/any other kind of contact with anyone.  We have finally made the move back from Spain to England and with it has come the million different things that need organising – the number one thing being the phone line and internet connection.  After several conversations with British Telecom (civilised quickly degraded to shouting, which then turned to begging) and still no further on, I have finally resorted to the extremely expensive but unfortunately necessary pay-as-you go method in order to get internet connection.

For me not having internet is a bit like not having electricity or gas; it’s a bit of a necessity.

Anyway, we are finally back and it all feels a bit weird.  We are in a new city, though everything seems strangely familiar.  I have to admit it was lovely to wake up the other morning to find a clear blue sky and a scattering of snow on the ground. It has done nothing but rain in Spain for the past three months (I know!  Crazy –huh?).

Even so, always there is that nagging feeling of ‘have we done the right thing?’ I do worry that I am one of those people who is never happy wherever they are and is constantly looking for the next best thing without realising how good I’ve actually got it.  Maybe that is just a lesson I am slowly starting to learn…

When I sat my family down to watch this movie it was under a hail of protest - I was the only one who really wanted to watch it - and when The Unborn started I felt a familiar sinking feeling that I had seen this all before.

The Unborn starts off as a typical teenage horror movie - young attractive girl is babysitting and discussing her recent 'bad dream' with her equally attractive, valley-girl-type friend on the phone when she hears voices coming from the baby monitor.

The main character Casey is being haunted by a freaky-looking little boy and one of her eyes starts turning blue. She goes to a doctor who tells her that this has something to do with her being a twin in the womb, and so naturally she suspects the little boy haunting her is her unborn brother...

It is actually a Dibbok, an evil demon that has been hanging around her family for the last few generations, starting with her grandmother in the Holocaust. There is an interesting link back to Auschwitz and the doctor who did tests on twins (a real occurrence, and for anyone who is interested there is an amazing novel written by Lynda La Plant about twins separated during these tests), but this is just skipped over, which was disappointing as it would have actually made for an original storyline! As it was the movie basically just went back to the demon trying to kill everyone around Casey.

I would have really liked it if this movie had gone down either the 'twin wanting to be reborn' route, or the 'Auschwitz' route, but as it was The Unborn was basically just another movie about a random demon wanting to kill everyone. It is a shame because there were some really creepy moments, such as when Casey wakes up to find herself suspended on the ceiling, facedown, and see's herself still lying in bed only for the bedcovers to be pulled down to reveal the freaky little boy curled up beside her. There are also some moments that reminded me of The Exorcist, with people being wrenched so their bodies are on backwards and doing a weird spider-walk while chasing people. 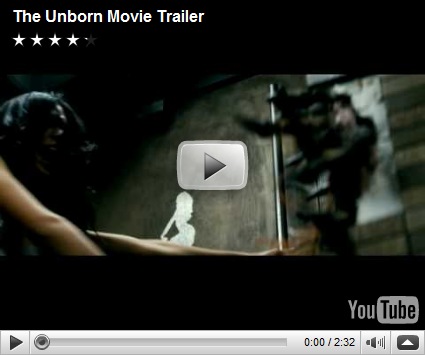 This definitely isn't a must see movie, but it did fill in a few hours on an otherwise dull night, and all of my family were still talking to me by the time it finished, so I guess it couldn't have been that bad!

Posted by Marissafarrar at 16:10 4 comments: