I am finally back on-line! Hurrah!

It feels like it has been forever since I have had the internet and, however sad I may be, it has felt a bit like I have had my life on hold.  So now I am back and trying to catch up on lost time.

Just because I only write horror doesn’t mean I only read horror (though I do read a lot of horror!).  I’ve decided to branch out a little about what I write about on my blog, because I have a new, totally horror based project which will soon be coming to fruition.

I’m sure there will be some of you out there who hate Jodi Picoult, but I am a fan.  There was a little while where she was becoming a bit formulaic, and she still is to a certain extent, but what she does she does well. 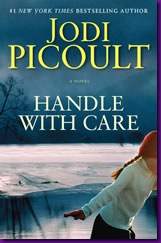 Handle with Care is about a little girl called Willow who is born with OI - Osteogenesis imperfecta (brittle bone disease).  She has multiple broken bones before she is even born and has over fifty breaks by the time she is five.  The story is essentially about Willow’s mother, Charlotte, suing her obstetrician (who is also her best friend) who she believes missed a sign that would have told her about Willow’s disease and so would have given her the option to terminate the pregnancy.  But to sue her doctor also means saying in court that if she had of known about the disease then she would have aborted the pregnancy.  Heavy stuff, huh?

I really enjoyed this novel. Picoult has a way of making you feel empathy for every character, but also disliking them a little as well.  She writes each chapter from a different characters point of view which helps you get insight into their emotions and motives.  Nothing and nobody is black and white in her novels.  One minute I found myself taking one characters side, the next the oppositions.  Throughout the novel I was putting myself in each of the characters positions . On the front cover of each of her books is the question, ‘what would you do?’ and I honestly found myself asking myself that the whole time.

Though I did really enjoy the book, and found it hard to put down, I was a bit disappointed with the ending. I won’t spoil it for everyone, but the book does have a bit of a sting in the tail that left me feeling a little cheated.  Even so, I would still highly recommend Handle with Care – an honestly written novel that leaves you thinking…

Posted by Marissafarrar at 15:42