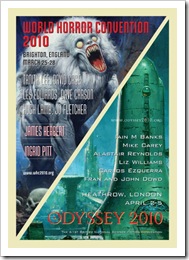 This weekend brings with it the World Horror Convention to the  seaside town of Brighton, UK.  It is the first time the convention has been to the UK, so I hope it is the start of more to come.

For those who don’t know Brighton, it is a great town.  It has a huge alternative and gay scene, great clubs, bars and restaurants.  I’ve been there a few times and the thought of thousands of horror fanatics descending on the town does make me smile.  Of course I would have loved to go myself, but at the price of £100 a ticket (yikes!) and with baby due to make an appearance any day now, it didn’t seem like such a great idea.

I wanted to review a James Herbert novel as he is guest of honour at this years convention.  Previous guests of honour have included Anne Rice and Stephen King, so it is a pretty big deal.

Jim True wasn’t there when he died.  While he was ‘away’ on an out-of-body experience (something he has been able to do since he was a child) someone murders him. They chop his body into little pieces so he has nothing to come back to.  In the days, weeks, and months that follow Jim True finds out things about his life he wishes he had never known.  And in that time he tries to discover exactly who killed him – was it the serial killer who is terrorising the city, or was it someone much closer? 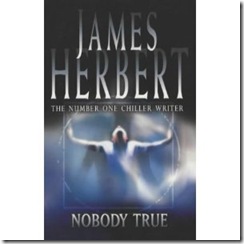 I really liked the concept of this novel – that you could ‘die’ while you were out of your body, but I did start to feel irritated by Jim True’s insistence that he ‘did not feel dead’, and his refusal to believe it.  If I had come back to find my body mutilated beyond recognition I am fairly sure that I would jump to the conclusion I was dead, however shocked I was.

The whole novel is written in the first person, which was probably necessary given the content,  but I did find myself wishing that I could get someone else's point of view – such as the wife or daughter’s.  I wanted to know if they could sense him still being around them and how they felt about things.  While Herbert does try to give an idea by their reactions, it is not the same as if he had written some of it from their points of view.

During the novel there are also some graphic and fairly disturbing scenes of necrophilia.  The whole necrophilia part did turn my stomach, though it was necessary for the story-line to a certain extent.

Overall I enjoyed the book.  It had a good pace and I did enjoy the storyline, however disturbing.  I guess I would have liked a little more on how his essentially being a ghost was affecting his family, and a bit more of a spiritual side to the book, but he didn’t really go down that route, which was a shame.

Other James Herbert books I LOVE are ‘Fluke’, and ‘The Magic Cottage’.  If you’ve not read them they are both worth a go.

Posted by Marissafarrar at 12:06