Ever since I saw this movie reviewed on Sky news this weekend, I haven’t been able to get it out of my head.  I think it looks great, and the fact it was made on a fifteen thousand dollar budget amazes me.  Basically Gareth Edwards just took off backpacking with his friends around South America, recorded scenes, and then each night downloaded the stuff to his computer and Voila! a movie was made. And apparently the computer he did the special effects on was bought from a shop (not specialist), but was more powerful than the one they used to make Jurassic Park!

Synopsis: Six years ago NASA discovered the possibility of alien life within our solar system. A probe was launched to collect samples, but crashed upon re-entry over Central America. Soon after, new life form began to appear and half of Mexico was quarantined as an INFECTED ZONE. Today, the American and Mexican military still struggle to contain "the creatures"...... A US journalist agrees to escort a shaken tourist through the infected zone in Mexico to the safety of the US border.

It’s due to be released on the 12th November 2010 (UK). Visually it looks fantastic, and certainly not like it was made on a fifteen-thousand dollar budget.  A lot of people are saying that it is just a Cloverfield rip-off, but I have a feeling it will be much better.

Here is the trailer: 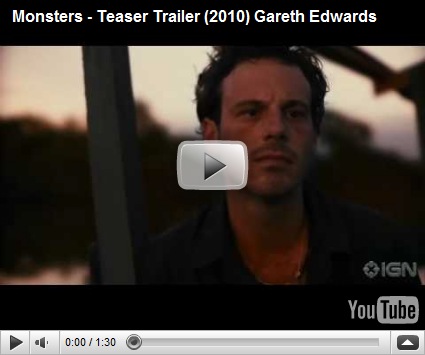 These successful, low-budget movies mark an exciting time in film-making.  Of course it does mean that every nerd out there will be picking up their video camera in the hope of creating a blockbuster.  But on the other side of things it also means that film studio’s will take more chances with relatively unknown, and low budget, film-makers and writers.

Rather than throw millions at one big (hopeful) hit, they are spreading their bets on these low budget films and hoping one sticks.

I’m currently putting together the bare-bones of a screen-play which I have been playing with in my head for some time, so the idea of more studios taking chances sounds like a good idea to me!

In the meantime I will look forward to Monsters release!

Posted by Marissafarrar at 15:11