Domination...one Pumpkin Seed at a time.

Hello, I'm James Garcia Jr. If you do not know me yet, that is okay. You will. I am here to assist our friends Marissa and Nicole as they do their little part to orchestrate Vamplit Publishing's master plan of ruling the publishing world. It is early, but very soon words such as "Vamplit", "Bestseller" and "Empire" will be universally appearing in the same sentences...

[The sounds of crickets can be heard]

Okay, we're working on it, though!

(In a nearly inaudible whisper) Really, we are.

What do you say we start again? I'm James. As you get to know me, feel free to call me Jimmy. My novel, Dance on Fire, was published by Vamplit Publishing. It's the same house that brought you Alone and Release. Just like Marissa's and Nicole's e-books, my novel is about to become a paperback, too. We're all terribly excited about this, so you should be hearing more as the days begin to grow cooler and summer finds itself driven away for another year. Dance on Fire is a crossover Christian/Horror novel about vampires, but I didn't post today to discuss my novel. I posted to talk about the novel of yet another Vamplit Author, Timothy Hobbs. 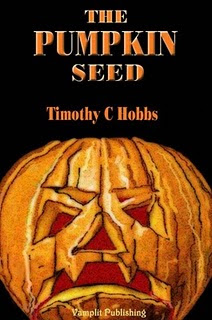 In a day and age when many vampire novels are romanticized, comes a book that seems to want to strike a blow right into the very heart of the topic.

"...will no longer attempt to date these entries. There is no point. I am dying, of that I have no doubt. I feel I have no connection with the physical world and that I am floating. An animal's corpse lies in the middle of the room. It has a wretched marvelous stink. It is difficult to concentrate. My brain is on fire and all light is painful. My throat is aching and parched but the thought of water is dreadful. The sound of scraping feet resonates in the darkness. Groans of hunger are joined with my own. Vairaja appears through the blackness. His face is strained and pale. His touch icy. We kiss each other on the neck and taste the saltiness of our blood. I must drink for two. My belly swells.

"...I no longer see the day. Only shadows bring comfort. The dead walk around me, their howls of hunger are ghastly. My child's wails are silent in the womb."

Very often readers proclaim that they simply could not put a novel down. Well, I will tell you that I work 10.5 hours a day in my day-job, write for three blogs and finally a local on-line magazine; however, whenever all of those were done, and the family was happily doing their own things, I was back in that bedroom with the Kindle, wondering what in the world might happen next. If it weren't for the fact that I had deadlines to meet, I would have skipped a few of them in order to read this book. It's that good.

Part of the reason why I am so excited about this novel is due to the fact that just when I thought that I might have seen it all, came a tale from somewhere otherworldly. Told entirely through diary entries and over the course of centuries, we glimpse the people that were, and the changes that occurred when they became the creatures that they will forever be. Another thing that is refreshing about Mr. Hobb's effort is we get to see the lineage of multiple generations of these. Without revealing their names and thus spoiling the story, we get to see one of these vampires create a second, who much later creates one of his own, and so on.

These Vampires do not have meet/cutes, but bond only for security and feed to survive. The characters are as multi-dimensional as I have ever seen in print. The vampires are not simple monsters. They are beings that used to be people; people who used to believe certain things and rationalize and love, and we watch with horror as everything that they ever were, changes.

I must note that this novel is not for the faint of heart. It gave me cause to cringe more than once. I was almost in disbelief a time or two, contemplating what might happen, but not actually thinking that the author would go there. He went there. That's not to say that the novel is objectionable or graphic for the sake of attempting to be shocking. For me, personally, I liked the idea of this novel getting us back to the basics, and that is horror.

If you like a good horror novel that is intelligent and ground-breaking...I offer you The Pumpkin Seed.

Posted by Marissafarrar at 05:00