Under The Dome, Stephen King 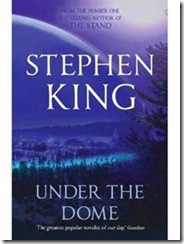 I think I have probably made it clear by now that I am a huge Stephen King fan.  I grew up reading his novels and whenever I thought about what my aspirations were as a writer his name was always at the forefront of my mind.  of course, I wasn’t just thinking about the millions of dollars (although that would be nice), what I really wanted to be able to do was create characters that feel as real as any actual person and combine them with original and involving plots.

Unfortunately most of Kings best novels (The Stand, It, The Talisman) were written a long time ago (and were written when he was suffering from a narcotic and alcohol addiction) and it does feel as though he is always striving to live up to those older books.  Unfortunately, more often then not, he falls short, but the books he produces are, in my opinion, still head and shoulders above most other horror writers out there.

Under The Dome is an epic novel, at over 300,000 words.  However, it certainly doesn't feel like an overly long novel as King keeps the pace going throughout the book. It takes place in the small Maine town of Chester’s Mill where, one warm October morning, a giant invisible dome falls down around the town, killing several and cutting the town off completely from the outside world.

But it is not the creators of the dome that are the thing to be feared. The town is run by ‘Selectman’, second-hand car salesman, and methamphetamine factory owner, Big Jim Rennie.  As the dome fails to be penetrated by missiles, acid, and anything else the army tries, Big Jim starts to take over the town as a dictator.  He uses riots, arson, and murder to frame the one person who could help the town ‘Colonel Barbara,’ a retired Iraq soldier who now works as a short order cook in the local restaurant.

As fear takes over, the towns population is split between those on Barbie’s side, and those on Big Jim’s.  Although there is a sci-fi aspect to the novel, this is not focused on. Instead it is simply the people and their ‘small lives’ that leads to the potential destruction of the town and everyone in it.

Under The Dome did not disappoint. It is not The Stand (the novel it has been most compared against because of its length), but it is still an action-packed novel that kept me gripped from start to finish.  The numerous characters were King’s usual ‘larger than life’ cast, and I missed them when I had finished.

My only negative was (*Spoiler alert! Spoiler alert!*) the number of people who were killed off.  While I understand the need for a few to die, towards the end of the novel I couldn’t help but start thinking ‘oh God, not another one!’  I wanted to shout at the book ‘not the children and dogs – at least leave them alone!’ I do like a happy ending and when most of the people you have come to love over the last five hundred pages end up carking it, it does feel like a bit of an anti-climax. I also would have liked to have had more of a final confrontation between Big Jim and Barbie.  It did feel as though the novel had been building up towards the big ending, yet it didn’t happen.

Despite this I still thoroughly enjoyed the book.  Not quite ‘King at his best’, but certainly getting there.

Posted by Marissafarrar at 14:00