M.F Today I have author of Vampire Ascending, Lorelei Bell with me to tell us a little about herself and her books. I met Lorelei when I first started blogging and she's always been a great support in the blogging world and a lovely lady to get to know.

Hi Lorelei, thanks for stopping by my blog and sharing a little about yourself and your work.

M.F.  Let’s start with the most important thing: your books. Give us a brief description of the novel you want to talk about today.

L.B.  Vampire Ascending is about a Touch Clairvoyant who needs a job, and is offered one as a clairvoyant for a vampire magnate in Chicago. On her way to the interview, she's attacked and bitten by a werewolf. Nicolas, who was to interview her, comes to her rescue. After she is hired, she's entangled in a mix of mystery, suspense and adventure that include romantic trysts, and dangerous situations involving vampires, werewolves, and shape shifters, and demons. Sabring isn't exactly thrilled about working for vampires, but she needs the money, and also, she wants to find the gorgeous and mysterious vampires who has been lurking around her house, and who bit her when she was ten, marking her for his own, and also turned her mother into a vampire at the time.

M.F.  What got you into vampires and when did you first notice the attraction?

L.B.  My attraction came when I was a teenager. I simply began watching all the vampire movies that were on TV, other shows such as Dark Shadows, Bewitched, Adams Family, The Munsters were my favorite shows. Halloween is my favorite holiday. I don't know what actually triggered it, but I definitely was walking to a different beat.

M.F.  So what are you working on at the moment? Have you got any new projects in the pipeline?

L.B.  Very definitely! My second book of the series, Vampire's Trill, is with my publisher, and I'm hoping for a late summer release. I've got the third book in first draft done, and begun writing notes and even a couple of chapters of the 4th one. I simply can't shut my characters up. (chuckles)

M.F.  Is writing something you’ve recently got into, or have you been writing for ages?

L.B.  I've been writing for ages. Okay, let's see, since 1971, in high school. It took me a long time to learn how to write. The old adage goes "No one can teach you how to write." But you can eventually learn by reading and really studying your favorite authors.

M.F.  I don't think someone can teach talent, but you can definitely learn all the technicalities of writing! I know you’re dyslexic. I’ve heard that people with dyslexia can make their minds work in different ways. How do you find that’s helped or hindered your writing?

L.B.  Oh, wow. My dyslexia was never diagnosed. I self-diagnosed. I just figured it out and I was in my 40's when I did. I couldn't spell worth a darn. I'm sure it's one big reason I was always rejected. Until the modern computer came along with the spell check, I was spinning my wheels. Even then you have to know grammar basics and all sorts of things that I just never knew or learned. I'm sometimes amazed when I actually know how to spell some odd word now now and then.

I also, have attention deficit, and my mind wanders. Which leads me to make up stories on just about anything. Which is why my brain is able to work on things--sort of split between the things I'm doing and what I'm able to think about. It took my husband a long time to figure out that I wasn't ignoring him. I had to explain it to him that I'm probably working something out in my head.

M.F.  What do you make of the changes in the industry, with so many more people going ‘indie’?

L.B.  What I'm seeing is people are now in control, where as 15 years ago, the industry was in control, saying whose books they wanted, rejecting others that were just as good--or better. After all, a lot of publishers did turn down many authors who went on and had best sellers--among them J.K. Rowling. I think we are seeing a turning point here. We'll just have to wait until the dust settles, see what takes shape. It's like a new piece of art being chiseled, and we just have to wait and see what happens. But, I think a lot of voices have been heard that have been ignored in the past. And if those who have gone "indi" are truly passionate about their work, and learn from their mistakes (or other's), I dont' see why they shouldn't be successful at it.


M.F.  Who is your greatest influence when it comes to your writing?

L.B.  I'll have to say a lot of different authors influenced me. The main ones, are J.K. Rowling, Dean Koontz, and a few others, mainly for certain works. Rowling's books where what made me realize I love fantasy, and should begin writing it. Koontz for sheer ability with the English language and being that he writes thrillers, I use his books for studying how he milks suspense. Janet Evanovich for humor and mystery. I just love her Stephanie Plum mysteries. Charlaine Harris, and Kim Harrison in the genre I write are my favorites there.

M.F.  Now for some more abstract questions: If you could be any character in fiction, who would you be?

L.B.  Probably my heroine, Sabrina Strong, because she's basically more like me--a big chicken. But I'd like to have abilities like she does. Oh, and all the hot men (vampire, etc) around her.


M.F. Sounds good to me! If aliens landed in front of you and offered you anything you wanted, what would it be?

L.B.  Make a movie of my book so I can retire from driving a bus. Do aliens make movies, you think??

M.F.  Lol! You never know! Tell us something quirky/interesting that people probably don’t know about you.

L.B.  I'm probably about 90% quirky. I have a bachelor's degree in art. I did crafts for a while, but had to come back to writing--even though I made more $ at crafts--because I know of nothing else that satisfies me when I get a scene done, or a chapter, or figure out some problem for the plot. I drive a transit bus for a living, I love living in the country away from people.

M.F.  Thanks for taking part Lorelei! 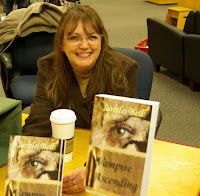 Lorelei Bell has always liked vampires and wanted Dracula to be the romantic hero! She lives with her husband of 24 years, and is the manager of a park, and drive transit during the off season. When not at work, She writes, reads and loves to watch Buffy.

You can find out more about Lorelei at her blog, Lorelei's Muse. More information about her novel, Vampire Ascending, can be found at Copper Hill Media and can be bought from http://amazon.com/ and Barnes & Noble.
Posted by Marissafarrar at 10:57