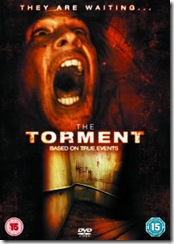 The story starts with a young couple, Alex and Kate, having a normal evening in at their flat. After a long explanation about the webcam, which Alex has set up in the house to record intruders, they fall asleep on the sofa together. Alex wakes up to find Kate sleep-talking, muttering, ‘don’t open it’. Cue the doorbell! Their close friend David turns up with the explanation that his girlfriend, Sarah, has been having an affair. Feeling sorry for him, they let David stay, but it quickly unfolds that the reason for David’s harrowing state is more than just upset that his girlfriend has left him. After Alex has gone to bed, David sees something out of the window – a weird zombie creature – and he then spends the rest of the night running around with a large bottle of salt in his hand, lining salt along the doorways.

The story quickly enfolds as Alex and Kate learn of their friends fears, and several nights of haunting ensues.

The Torment is a strange movie to watch, and ultimately one I couldn’t quite decide if I liked or not! At the time of watching it I found it to be slightly annoying and frustrating, yet when I woke up the next morning I still found myself thinking about it.

So what are the reasons for my mixed thoughts? Well, the movie starts with lots of promise. It is British (always good to support British films) and is another one of the ‘wobbly-docu-type’ filming style. There is a long talk up about the web-cam, and I had thought it was going to go down the same route as Paranormal Activity, but then it just seems to get forgotten about until close to the end, and even then it is very much played down. This is a shame, and they could have made so much more of it. Instead, the first half an hour of the movie is just plain weird. Much of it is David running around, acting strange (and Alex and Kate don’t even notice he is crashing about in the middle of the night) and it isn’t until he starts sleep walking that they realise something is wrong.

A lot of the movie is filmed in near-darkness, so it is hard to see what is actually happening, except for a lot of screaming and running around. Their hysteria is a little too infectious, and Kate allows herself to be barricaded into a room with a clearly unstable David, who is sporting a very large knife, despite her not actually having seen anything for herself. In fact, the whole way through the movie she doesn’t actually see anything, yet she does not do what any normal woman would do, which would be saying to her boyfriend, ‘uh-honey, I think your friend has some serious psychological issues,’ and kicking him the hell out of there. Instead she just kind of goes along with the madness.

There are also a lot of things that were hinted at and yet left untied. There is a whole plotline about a pregnant woman upstairs (and by the way, I really think pregnant women and babies should be left alone when it comes to horror) and that the house itself might be haunted, but then this again is just kind of forgotten about.

There are some good moments, when we are actually allowed to see the monsters, they are scary! But so much of it is in darkness, that it is really difficult to see what the hell is going on, except for them all screaming like girls because the lights have gone out!

So is David a lunatic, or are the monsters real? Well, it is that question that resides through out the film. But you never know, if you can manage to get through the first bit, you just may be surprised by the ending.

Could have been so much better, but still not a bad watch. Something Wicked, 6/10

Posted by Marissafarrar at 12:36