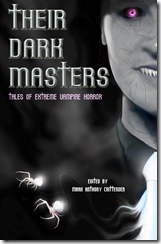 As many of you know, I have recently had a short story accepted for the vampire anthology, Their Dark Masters. At the moment the editor is looking at a December release, so it will be out just in time for Christmas presents for all those vampire fans out there!

I am thrilled to give you all a preview of the front cover and also a snippet of my story.

It is entitled, The Tunnel.

To set the scene:

Workmen are in the final stages of breaking through the Channel Tunnel (the tunnel that goes beneath the ocean, joining the UK to France). They have come across a strange object buried in the soft chalk marl, something that has wrecked their huge boring machines and must have been buried under the ocean for thousands of years…

Seven of the eight men lined up in front of the vessel. They were shoulder to shoulder, crammed in so they could each get their hands on it. The seam was just wide enough for the men to get their blunt fingernails beneath it, and they paused like that waiting for Ryan’s signal.

They all heaved and the top shifted, just a millimetre, but it did move. At the same moment the lights flickered. The radios all suddenly hissed with static, filling the tunnel with the sound of a thousand bees.

They all jumped back and the lid fell back into place. As soon as it did, the lights brightened and the hiss of static fell silent.

The men laughed at themselves, nervous tension crackling the air. The huge tunnel suddenly felt very small; walls and roof closing in on them.

“Don’t be ridiculous,” Graham laughed. “This thing must have been buried for thousands of years.”

They often had power surges down here. The lighting going out temporarily was a common occurrence.

“It was just a coincidence,” said Ryan. “Stop getting so spooked. Let’s go again, and I don’t want anybody soiling their panties this time.”

“Alright boss,” said Ted, sounding miffed. “You jumped as much as the rest of us.”

They lined back up again, each of them assuming their previous positions, John still watching from a distance.

They pulled harder this time. Suddenly the lid burst open as though it were pressurized, throwing the men away from it.

In the same moment the tunnel was plunged into darkness. Someone cried out loud, but it was disguised by the hiss of static suddenly surrounding them again.

A chorus of voices came back to him. All were nervous and strained, but none of them sounded as though they were in pain or danger.

The lights flickered back on and everything fell silent. The relief was palpable. Ryan blinked in the sudden light. Ted lifted his arm in front of his eyes and Graham squinted.

The stone container was split open, its top resting on the chalk marl behind. It was hollow, but empty. The hollow curve inside was just the right size to fit a large man.

They each picked themselves up.

John yelled from the back of the tunnel, “I told you it would be filled with gas.”

“It looks like a damn coffin.” Graham’s face was pale

“Don’t say that,” Robbie snapped. He was young and susceptible to such fantasies.

“Graham…” Ryan warned. He knew Graham was right, but the last thing he needed was for the rest of them to be spooked any more than they already were. He didn’t need a crew of grown men reduced to a bunch of scared boy scouts.

“Well it does,” Graham muttered, turning away.

How could anything have damaged the stone? It was so hard even the mole hadn’t left a mark on it? Maybe the inside was made of softer stuff?

Even so, he didn’t like the sight of those marks. They looked too much like scratches made by fingernails…

All rights reserved. This is a work of fiction. All names, characters, locations, and incidents are products of the author’s imagination, or have been used fictionally. Any resemblance to actual persons living or dead, locales, or events is entirely coincidental. No portion of this work may be transmitted or reproduced in any form, or by any means, without permission in writing from the author.

Posted by Marissafarrar at 11:06