This weekend crop circle enthusiasts from all over the world have been heading to Somerset for the annual Glastonbury Symposium.  It has now been running for twenty years, and the three-day conference features lectures investigating mysteries, including UFOs. The Symposium is also the longest-running annual gathering of crop circle experts.

The formation of crop circles have long been synonymous with that of aliens.  Many believe they are they created by spaceship’s landing or even created as a tracking system for alien space-ships to land?  Of course these strange creations have (sadly) now been explained away by hoaxer’s with wooden boards and wire, but it would be nice to think that there was still some romance and mystery in these beautiful shapes.  Of course the farmers have a different point of view after whoever creates the circles does so by destroying their hard grown crops.

(Left) The site of the circle at White Sheet Hill is just a few miles from Warminster, which is the "UFO capital" of Britain. This stunning circular 300 foot design appeared in June 2010 and was believed to represent the passage of the moon and sun. It contained six key circles with a seventh in the centre, each surrounded by 24 smaller circles and 18 other circles providing an outer ring.  It is supposed to be the most complex crop circle created this year.

(Right) One of the most intriguing crop circles ever seen in Britain appeared in a barley field in Oxfordshire, on 2nd June

The owners of the land said whoever created the design caused about £600 of damage!  Though the farmers admitted that they thought it was beautiful, they then went on to give information about the people they believed had created the circle.

(Below) This circle appeared in a field near Barbury Castle, an iron-age hill fort above Wroughton, Wilts, and has been described by astrophysicists as "mind-boggling". The formation, measuring 150ft in diameter, is apparently a coded image representing the first 10 digits, 3.141592654, of pi. 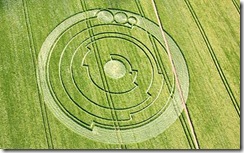 The shapes are beautiful and have become as much a part of our mysterious countryside as Stonehenge.  Yet I can’t help feeling sorry for the farmers who wake up to find hundred’s of pounds worth of crops destroyed.

A movie which depicts the use of crop circles is Signs (2002). Starring Mel Gibson and Joaquin Pheonix; written and directed by M. Night. Shyamalan. It follows a family who find crop circles in their corn and then try to survive when an alien invasion ensues. It’s a decent movie if this post has suddenly inspired you to watch something about crop circles!

Below is a clip of the alien sighting in the movie. It makes me jump every time! 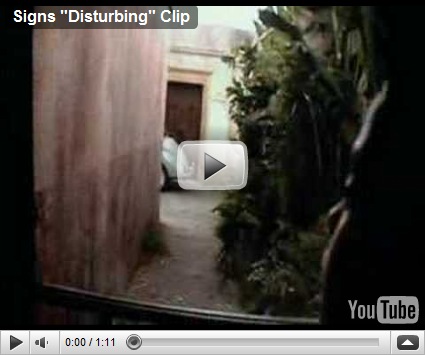 Posted by Marissafarrar at 21:21