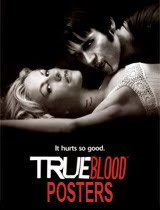 Now I know there will be many women out there who would read this and think that I am exceptionally strange, but I can't help thinking that the modern day vampire is ultimately what women want. I'm not talking about the killing people and sleeping in a coffin type, I am talking that of Brad Pitt in Interview with the Vampire, Bill in True Blood, though I personally wouldn't go for Edward in Twilight - a little young for me and reminds me way too much of my little brother, which is just plain creepy.
Anyway, they all have that intense, tortured soul thing going on and you are ultimately the one who is going to save them from an eternity of loneliness. Plus they are the ultimate bad-boy; sexy with just the right dose of danger. Of course it is a shame they wouldn't be able to take you to the Bahamas for a couple of weeks of lying in the sun, but I think I could bring myself to make that sacrifice

For anyone who has been able to watch the second series of True Blood, Bill's outpouring of love for Sookie captures exactly what I am talking about. How could any woman resist being told by a gorgeous man who, not only has the whole of eternity, but wants to spend it with you, that you 'are his miracle'. I mean, come on, I think its a miracle if my hubby gets me a card on my birthday! Personally I don't get last season's love triangle. I'm sorry, but old shape-shifting Sam just wouldn't get a look in. So what if you can turn into a dog? Since when have dogs been sexy?
We have yet to get the second season here in the UK and I am waiting impatiently and making do with short clips on youtube (any ideas when it will be over here anyone?). In the meantime I have been dosing myself in my own tortured vampire with my sequel to Alone and I think it is going well, though it is still very early days.
M X
Posted by Marissafarrar at 10:27