It's a know fact you need to have thick skin to be a writer.
Let's face it, we all want to write our new manuscript, send it out to our dream publisher/agent, and have them call saying you have produced a masterpiece, you are a genius writer, and they would love to give you a huge amount of money for said masterpiece. Unfortunately it very, very, very rarely happens that way. Most of us have to plod through numerous rejection letters before we find someone willing to take a chance on us.

I went through eight years of nothing but rejection letters. I remember the first time an editor actually wrote a personal note back to me--it was the editor of the magazine Interzone--telling me he liked my stuff, but it wasn't quite right just yet, but to keep submitting. I was overjoyed. Okay, it was a rejection, but it was a great rejection! Someone had actually bothered writing something other than a standard note. In my mind it was almost as good as an acceptance.
Yesterday I had a short story rejected. It was the first in three acceptances, so I think I had got a little cocky. I had to actually read it twice, and my first thought was 'a no'? How can it be a 'no'? It's easy to forget how rejection sucks! So how did I deal with it? Well I sulked for about half an hour and then I turned around and submitted it somewhere else. Maybe it will get another rejection, but at least I won't be quite so shocked this time! As the saying goes, pride before a fall!
I found some rejection letters on the Internet and had to share them. Find some solace that however bad your rejection letters are, at least they're not as bad as these ones! 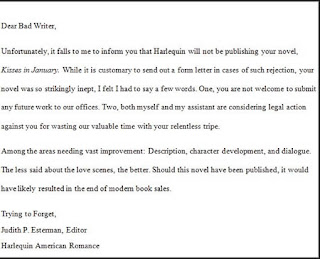 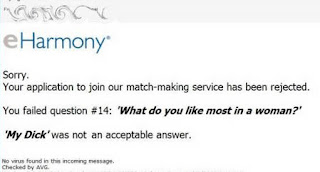 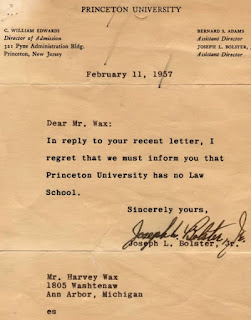 By the way, the Harlequin one was a fake!
Posted by Marissafarrar at 10:59

Email ThisBlogThis!Share to TwitterShare to FacebookShare to Pinterest
Labels: Rejection