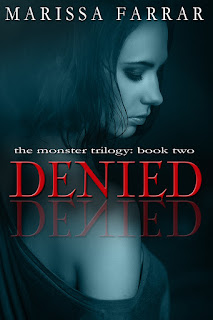 Here it is!  The cover for Denied the second book in my dark romance Monster trilogy.. I hope you all like it!

Here's the blurb to whet your appetite!


Lily
After Monster makes an impossible choice that throws her world into chaos, Lily finds herself back in America. Unable to allow what happened to her to go unpunished, and riddled with survivor’s guilt, Lily decides she needs to track down the traffickers who took her.

Monster
Monster has only ever wanted to keep his Flower safe, but, when he hears of her plans, he is forced to take control once more. Stepping out of his comfort zone, he vows to once more make her his captive.
Denied
Except Lily doesn’t know the true reason for Monster making the choice that has led to her current situation, and her actions have made her the target of someone who wants a debt paid – a debt that must be paid in flesh...

You can pre-order ‘Denied’ now from Amazon, Apple, and Kobo, and other stores shortly. The official publication date is March 29th 2016!

If you want to check out the first book, ‘Defaced’, it is also available from all the main online stores, including Amazon, Apple, and Barnes & Noble, in both in ebook and paperback. 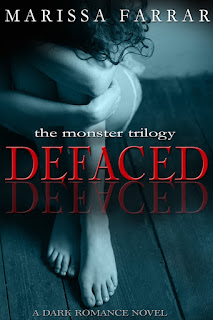 Posted by Marissafarrar at 21:25