The most powerful mobster in New York wants me dead—trouble is, he’s also my father. 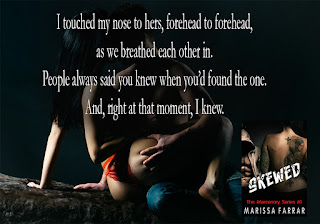 My brand new novel, Skewed, is now available for pre-order for only $0.99! Grab it now as the price will rise to $3.99 after publication. If you loved 'Defaced' then you'll love 'Skewed' too. Take a hardened hit man, and the daughter of a mafia don, and throw them into a life or death situation, and you're sure to see sparks fly! 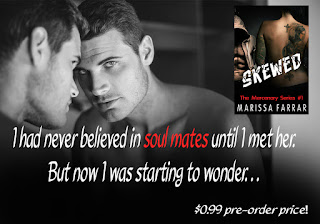 I'm a woman on the run from the most feared mobster in the country. Worse, he's my own father. I have my sister to keep safe, and a hot, deadly hit man on my trail. Only one thing to do … see who gets the first shot. But don't worry about me, I'm no sweet young thing. In fact, I may just be as deadly as the guy who's out to end me.

My name is Verity Guerra. I'm on the run from the most ruthless mafia Don in New York—my father. For the past few months, my sister and I have been in Witness Protection, and I’m determined to live long enough to testify against him. I knew he'd send someone after me. But I didn't bank on a hit man known only as X, with cheekbones sharp enough to grate Italian cheese, and muscles that won't quit. But what he doesn't know just may kill him. Behind my pretty façade, I’m a cold-blooded killer. Too bad X is determined to end me, or I might just fall for those piercing blue eyes.

Call me X. I’m a contract killer, hired to make sure Verity Guerra turns up dead. A beautiful face won’t stop me from doing my job. Killing isn’t just my work—it’s in my blood. But her dark eyes, silky hair, and tattoos mask a lethal killer. Finally, someone worthy to be called my mark. When her little sister goes missing, we have only one question—do we stop trying to kill each other long enough to get her back?

Turns out love and hate aren't so far apart. Can we fight our desire for each other … or will we both end up dead?

Don't miss this sexy thrill-ride through the Mafia underworld—get your copy of Skewed today! 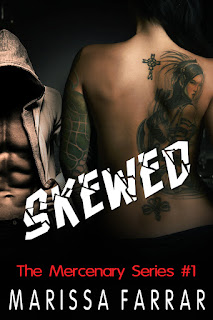 I'm also posting the first few chapters over to Wattpad, so if you're not already following me over there, please do! You'll also find lots of my other novels there for you to read for free!
Posted by Marissafarrar at 19:06