Today I get to be one of the lucky few who gets to reveal to the world the cover of Nicole Hadaway's novel,    'Release'. Nicole was originally published alongside myself with the small press who first published 'Alone'. She is now re-releasing the novel with the super sexy new cover. Check it out! 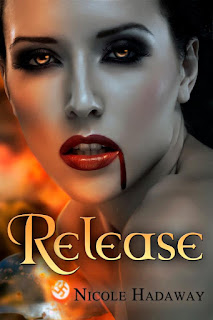 How hot is that? The artwork was done by Claudia McKinney at Phatpuppy Art, with type done by Ashley at BB Designs (Bookish Brunette). Phatpuppy Art are the same people who created Amanda Hocking's new covers, so she was certainly in good hands!

So has the cover got you interested? Here's the blurb:

“The ends justify the means”...

For vampire Miranda Dandridge, using her supernatural abilities to rescue children from impossible circumstances is her means to be a part of the human world that she loves so much, despite the atrocities of WWII.

For doctor Ben Gongliewski, saving his fellow Jews from the horrific death camps is an end for which he risks his own life every day, hiding his Jewish heritage while feigning loyalty the SS.

Neither Miranda nor Ben expects to find love in World War II Europe, but that is exactly what happens as they work for the Resistance.  When the war draws to a close, it seems like the vampire and the doctor are free to start a future together.  But just how far the Nazis will go to further their own evil ends?

Desperate times make for ruthless men as loves and lives are threatened, but, Miranda and Ben know that their world cannot go to hell, not by any means…

RELEASE by Nicole Hadaway, to be published January 4, 2013 by Visionary Press Cooperative. Available as e-book and paperback from Amazon.com, and e-book for Nook at Barnes & Noble.
Author profile:
"As a lawyer, Nicole Hadaway knows all about bloodsuckers and deals with the devil. She currently lives in Texas where she pens such tales involving the supernatural, featuring her heroine, the vampire Miranda Dandridge." You can find out more about Nicole at her blog, The Dandridge Estate.
Posted by Marissafarrar at 14:45