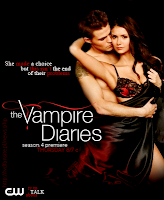 I was late coming to The Vampire Diaries. When I first saw the adverts of Elena stumbling around in the woods with the 'vampire' (who randomly could walk in the light) vanishing when she cut her ankle, I actually rolled my eyes.

I've loved vampires from my teenage years. My first introduction was a birthday sleepover involving lots of giggling girls and 'The Lost Boys'. After that was the dark, brooding and ever-lastingly lovely Louis from 'Interview with the Vampire'. So when I saw ads for 'The Vampire Diaries', I rolled my eyes and went back to writing my stories - where vampires were actually scary!

However, one night while spending my usual evening in front of the computer,  the television was on  in the background and the show came on. We were onto series two by now and strangely my interest was drawn. Once I actually stared paying attention to what was happening, that was it. Show over... at least on my part. I was hooked.

Unlike in Twilight, these vampires kill! They also have sex - and hot sex at that! I watched a couple of episodes and soon went back and rented out series one to watch each episode back to back (cue several late nights and crabby mornings, though they were all worth it...) 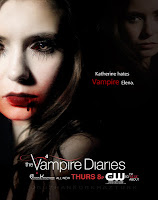 So, here in the UK, the fourth season has just aired. Wow! What a fantastic start.

I have to be honest, initially I thought Elena becoming a vampire was a cop-out (see here for my earlier post) but the way it was handled was excellent. I loved how the production team worked in all of Elena's heightened senses so we felt them for ourselves, and also how she remember the things Damon had tried to glamour from her memory.

The usual brotherly tension was also prevalent in this episode, with Damon angry at Stefan for following Elena's wishes and letting her die. Damon would have saved Elena first, whatever she wanted. But I had to wonder, did Damon want to want to save her humanity because he wanted her to be human or was it because he didn't want her to remember the times he'd told her he loved her and that he'd met her first?

However, even though I love Damon (and really who doesn't???), it was also lovely to see Elena and Stefan growing close again. Perhaps this will be the end of the love triangle for a while?

There were a couple of other story lines which ran alongside Elena changing - that of Klaus taking over Tyler's body (which I couldn't really see the point of) and the council getting all of the Salvatore Vervain and planning to rid the town of the vampires and all those who help them. Also, witch, Bonnie, attempted to help Elena, but at the same time welcomed in some 'dark magic' so I'm sure that will be a featured storyline during this season as well.

So this season really does look like it's going to be different from any of the others. With Elena now a vampire, and a whole heap of people not only out to get them, but to also expose them for what they are, Season four will be one to look forward to!

Posted by Marissafarrar at 16:00