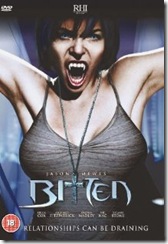 A paramedic, Jack, rescues a woman, Danika left for dead after a deadly assault. When she refuses to go to the hospital, he takes her in, nurses her back to health and soon falls in love with her. Before long he discovers that this mysterious woman has been turned into a vampire, and chaos ensues as she needs to feed. While Jack struggles to find ways to satisfy her hunger, while not getting too many people killed, he tries to avoid getting both himself and everyone he knows killed!

I found this movie quite late at night, while I was flicking between my four-hundred or so channels, desperate for something to watch!

For a  low budget, B-movie, it was actually quite enjoyable. It takes into account all of the problems one would encounter when falling in love with a vampire. Yes, they may be hot, yes, they may want to be with you forever, but when it comes down to it things are not going to be smooth sailing.For example, when your ex-girlfriend calls around, only to find the hot new girlfriend wearing her clothes, the ensuing argument is never going to end well for the ex!

Also a problem is that the vampire finds that feeding and sex coincide – which again is always going to cause problems in the bedroom!

The movie was obviously made for a male audience, but I still enjoyed it for what it was. Some of it is pretty funny, and its definitely a black, but humorous take on the recent surge of human/vampire relationships. I wouldn’t say rush out and get the DVD, but if you are a teenaged boy who likes vampires,(or you are really desperate for something to watch) you will probably love this movie!

Posted by Marissafarrar at 20:38