I am a closet Bruce Willis fan.  I’ll happily watch Die Hard, but my favourite is Sixth Sense.  It still gets me right at the end where the boy and his mother are sitting in the car 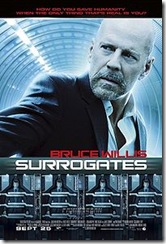 because here has been an accident up ahead and the boy tells his mother he knows someone was killed because she is standing beside the window.. brrrr… goose-bumps…

Surrogates is based on a comic book, which is never my favourite basis for a movie.  It is set in a future where people use completely life-like robots so they can live virtually through them. Most of the population sit at home in their dressing gowns, getting fat, not bothering to wash their hair, yet are out looking amazing with fabulous jobs, and having virtual sex with other gorgeous robots. Another benefit is that the owner of the ‘surrogate’ can never be harmed, as they are sitting safely at home, and if their ‘surrogate’ is harmed they can just get a new one.

Except all of this changes when the son of the man who invented the ‘surrogate’ technology is murdered through his surrogate being murder.  People are not supposed to be able to be harmed if their surrogates are, but now someone has invented the technology to do it.

Bruce Willis plays Tom Greer, an FBI agent.  Tom has a strained relationship with his wife since their son died several years earlier.  She now refuses to be seen, except through her surrogate, but Tom wants to get back to a more ‘normal’ way of living.

He is put in charge of finding the murderer and the machine that is used to kill both surrogate and owner.  His own surrogate becomes damaged and he starts to just use his real body. In the end he has the choice of continuing to live as they are or taking out the whole surrogate network (hmmm…I wonder which one he will choose?).

You could tell this movie was done by the same people who did Terminator.  Many of the graphics were very similar and the film did look good.  The premise was also interesting – after all, more and more of us are spending huge amounts of time on our computers, interacting with others through computers, some (saddo’s) even already living in virtual worlds.  So what is there to stop us taking it a step further and living completely through life-like machines?

Well, I just don’t think the huge majority of the human race would really want to live like that?  I can’t believe that essentially we are all just lazy slobs who care only about what people look like on the outside.  Even if I had a gorgeous robot out living for me, I’m sure I would still want to get up and do stuff.  At the very least I’m sure I would still shower and get dressed!

Overall, I really liked the idea of the movie, but the script didn’t feel like anything terribly original.  It was another movie they could have done so much more with…  6/10. 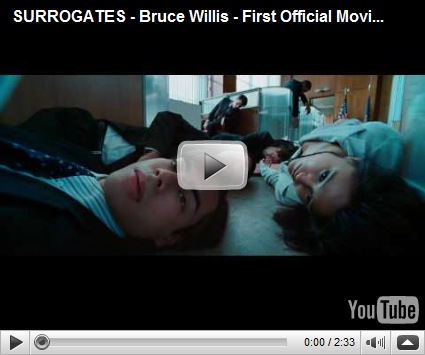 Posted by Marissafarrar at 11:39