Review: Paranormal Activity – worth the hype?

My absolute favourite type of horror movie are ones involving ghosts.  It is probably because I find them to be so much more believable than slasher-type horror.  I am a total believer in ghosts so the idea that this could actually happen always makes the movie more realistic.  When I heard about Paranormal Activity I could have jumped up and down for joy – it sounded like my perfect horror film.  Hyped up as the ‘one of the scariest horror film ever made’ I was intrigued.

Paranormal Activity is filmed in a ‘Blair Witch type’ style and credits at the start of the movie thank the police force for releasing the footage and the family’s of the ‘victims’.  All of this is done to increase the realism of the footage.

The story is centred around young couple Micah and Katie.  Micah has taken it upon himself to get a huge camera and try to catch the ‘paranormal activity’ that Katie is experiencing.

Within minutes I found Micah to be supremely annoying.  He spends most of his time following Katie around making jokes about either her ‘ghosts’ or her taking her clothes off for him.

A spiritualist soon turns up and we find out that the the ‘ghost’ has been following Katie around for most of her life.  He tells Katie that it is not a ghost but a demon (bummer) and gives her the number for someone else who may be able to help them, but Micah won’t allow Katie to call him (?).

Don’t get me wrong - I like subtle, but there is a difference between subtle and just plain boring.

Things do start to pick up, but the viewer still has to put up with increasingly annoying Micah. He decides to use a Ouija board despite being told by both Katie and the spiritualist NOT to try to contact the demon. He also refuses to allow Katie to call the demonologist and generally just wanders around either shouting at the demon or taking the piss out of Katie.  Now if that had been my boyfriend I’d have quite happily left him by now and dealt with the demon on my own.  After all, apparently the demon has been following her around since she was eight and other than frightening her had never done her any harm.  Quite clearly it is Micah who is really pissing it off.  Oh, and to really make Katie feel better he shows her a bit of video footage he finds on the Internet about a woman who had exactly the same thing happen to her and shows her chewing her own arm off. Nice.

Saying that the movie wasn’t a complete waste of time. There were some really creepy moments caught on camera, such as the bed sheets moving while the couple are in bed, some weird night time behaviour by Katie, and then there were the footprints beside the bed.  But other than that there was too much going on off camera.

I enjoyed the film and probably would have thought more of it if it was just something I had stumbled across in the video store.  As it was there was too much hype surrounding the movie and it just didn’t live up to its trailer.  It’s the worst kind of disappointment because the producers could have done so much more with the movie. 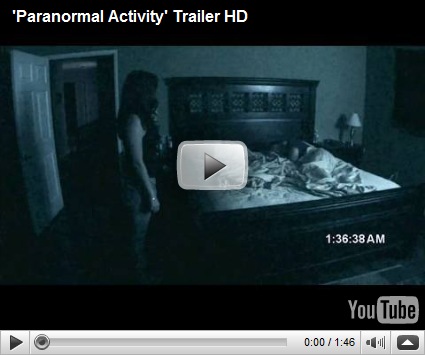 Overall I give Paranormal Activity a 6.5/10.

For those who have entered our True Blood contest, we will be announcing the winners next week so watch this space.  We had hoped to do it this week, but due to recent events (i.e. new baby arriving a bit early) it is a bit delayed.  If you haven’t entered and would like to then just head on down to our post and answer our question.

Posted by Marissafarrar at 19:39