Stephen King: On Writing – a review

Now I know this book has been out for a while now, but I wanted to give a quick review about it mainly because it ties together two great loves – writing and Stephen King! 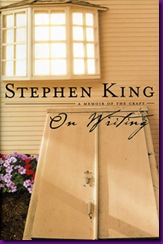 I have been a huge fan of Stephen King’s for a long time now, and though I know he has his critics he is also the King of Horror, and one of the biggest bestsellers of all time, so he must be doing something right.   As soon as this book came out back in 2000 I snapped it up and I think it took me about two days to read.  I have re-read it numerous times since and often pick it up just to remind myself of parts.

What I really loved about this book is that you got to learn so much about the man himself and it isn’t all just about him telling you how to write (though he does do that as well of course).  He talks about his childhood, meeting his wife and having his family, and getting published.  One of my favourite parts of the book is when he describes how he and his wife were living in a crappy four room apartment and were seriously broke with a young family and he gets the call to say he has sold the paperback rights to Carrie for four hundred thousand dollars.  When his wife came home and he told her the news, she started to cry.

That always chokes me up and gives me the motivation to keep going.  Even Stephen King was broke once upon a time!

In the book he also talks frankly about his alcohol and cocaine addiction.  He says he cannot even remember writing some of his books he was so high (sadly they were some of his best). It was also something he very nearly lost his family over.

The ‘On Writing’ part of the book also has some helpful hints.

Two of the best pieces of advice I came across were to commit yourself to 1000 words a day, and to ‘omit needless words’.  The thousand words a day I generally manage (even if it isn’t all on the current piece of work); omitting needless words is something I am still striving towards.

The one part that did have me gulping and thinking ‘yikes’ is where he suggests that a ‘goodish length of a book’ is 180,000 words!  Now most of my stuff ends up around the 90 – 100,000 word mark (though Alone was only just over 80,000, by far my shortest novel).  I know when Twilight first came out everyone was amazed it had been published as a first novel as it is 120,000 words.  The general consensus seems to be that if a first novel is too long then a publisher won’t touch it; too much risk for the publisher as far as the cost to get it out goes.

Overall though, this book is great.  Its a good read; not just a ‘how-to’ manual. People who hate Stephen King would probably want to avoid it, as it has a lot of him in it, but if you are an aspiring writer, or you just want to know a bit more about his life, I would definitely recommend it.